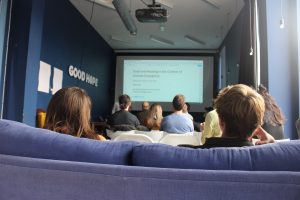 The fourth event in RUSS’s 2019 Community Housing Meeting series focused on the climate emergency, which has been declared by both scientists around the world, and locally by Lewisham Council in recent months. Rather fittingly, the meeting took place amid a week of peaceful protects by activist group ‘Extinction Rebellion’; creating blockades with makeshift gardens on London bridges and snarling up the city centre in an effort to force government attention to the issue. Dr Robert Biel (an associate professor at UCL specialising in international political economy, systems theory, sustainable development and urban agriculture) gave a talk on food and housing within the context of the climate emergency. Group discussions were then held on attendees’ individual understandings of the climate emergency, and how communities may go about bringing change in response.

Robert began his talk by setting out that his aim was to raise a number of questions about how communities may change in order to make their housing and food consumption more sustainable, without necessarily providing comprehensive answers. He spoke about how the climate emergency demands “system change rather than climate change”, necessitating efforts by communities to organise their lives differently. The transition to a different way of life is difficult to define or, indeed, pinpoint because waves of social change overlap as old paradigms break down and new ways of life begin. The announcement by Lewisham council of a climate emergency and the ‘Extinction Rebellion’ protests may well be episodes within this change. These acts also demonstrate the need for political change, a need that has been termed by academics as a ‘just transition’. This ‘just transition’ is needed to unleash the capacities of people restricted by the current system, and the democratisation of knowledge on the issue of climate change in order to evolve our ways of life in response. 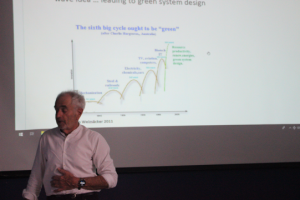 Possible answers within the urban environment to the key problems put forward by Robert are the use of allotments and rooftop gardens in cities, allowing and encouraging food growth in line with ‘agroecology’ in order to develop sustainable food systems. These suggestions overlap with architectural designs that incorporate food growing within building. Examples such as the Roof Water Farm in Berlin demonstrate ways of making use of wastewater to grow food in an urban environment (see: http://www.roofwaterfarm.com/en/block-6/). Robert discussed how certain ideas of sustainable food growing conflict with the idea of ‘agroecology’, however. These ideas come in the form of innovations that claim total control of conditions of growth, with the use of LED lights to assist growth in an indoor environment (for an example see: https://www.theguardian.com/environment/2016/feb/01/japanese-firm-to-open-worlds-first-robot-run-farm). Such developments do not allow for variation, which can facilitate much needed resilience within ecosystems. This factor may prove even more important in the face of climate change and the inevitable changes in ecosystems that will develop as a result.

A series of great questions flowed from Robert’s presentation:

“Where does water fit in?”

“Does the use of community land trusts give people the capacity to react to an unravelling society as a community?”

“To what extent are boroughs supportive of urban farming?”

“How should you present an argument for, or is there evidence for, the strengths of unpredictable planning (in ‘agroecology’)?”

Robert has released a publication online for free download as a pdf. The book ‘Sustainable Food Systems – The Role of the City’ by Robert Biel may be found at https://www.uclpress.co.uk/products/83490 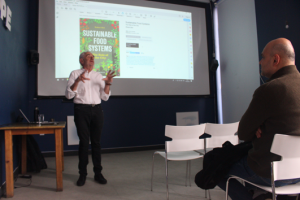 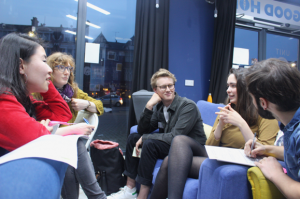 The group discussion in small groups following the talk centred on two questions:

In answer to the first question there were a variety of responses:

‘An opportunity for innovation through technology, but also social innovations like community action.’

‘We need social change – interest from those in charge/with influence’.

‘Loss of nature and species, loss of habitats, farming, areas getting too hot/displacement.’

‘An opportunity to collectively organise.’

In response to the second:

‘Make sure the responses do not reproduce the same status of relations.’

‘Work collaboratively to ensure utility provision is just and efficient.’

‘Publication in order to show examples of best practice.’ 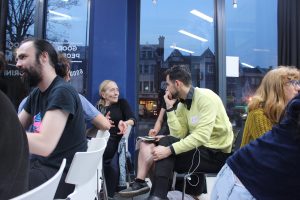 One thought on “Blog post – Community responses to a climate emergency”