Friday 29th April 2016 will go down in RUSS folklore as the day we secured the Church Grove site for our first affordable, self-build housing project in partnership with the London Borough of Lewisham. The conditional Development Agreement (DA) paves the way for our residents’ group and project team to design and build up to 33 new permanently affordable, highly sustainable flats and houses in Ladywell. 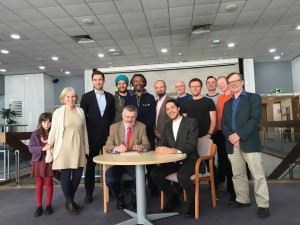 RUSS and Lewisham Council have agreed an historic deal that paves the way for a new community-led housing scheme in Lewisham. The agreement was marked at a special signing event with the Mayor of at Lewisham Town Hall. The conditional Development Agreement between the two parties has been formed ahead of RUSS acquiring council land for development. The document set out the conditions for RUSS taking possession of the site in Church Grove, Ladywell. It confirms that RUSS will provide 100% affordable homes and will commit to getting planning permission and funding for the project. 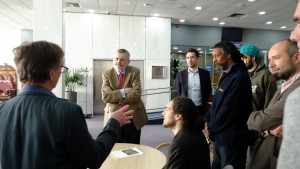 Emma Gittus, Project Manager for RUSS says: “this is a major step forward in RUSS’s journey towards providing sustainable, affordable homes in the borough. It shows that RUSS and the council are committed to making the project a success. It means that RUSS will ultimately get control of the Church Grove site and can begin the next phase of the project which is involving residents in design and securing planning consent, securng funding, and starting work on site with the self-build group. ”

Following an allocation ballot last month, RUSS has formed a group of self-builders who will become the residents of the 33 homes in the scheme. The group are now in the process of designing their homes, in partnership with architects Architype. RUSS aims to submit a planning application by October 2016.